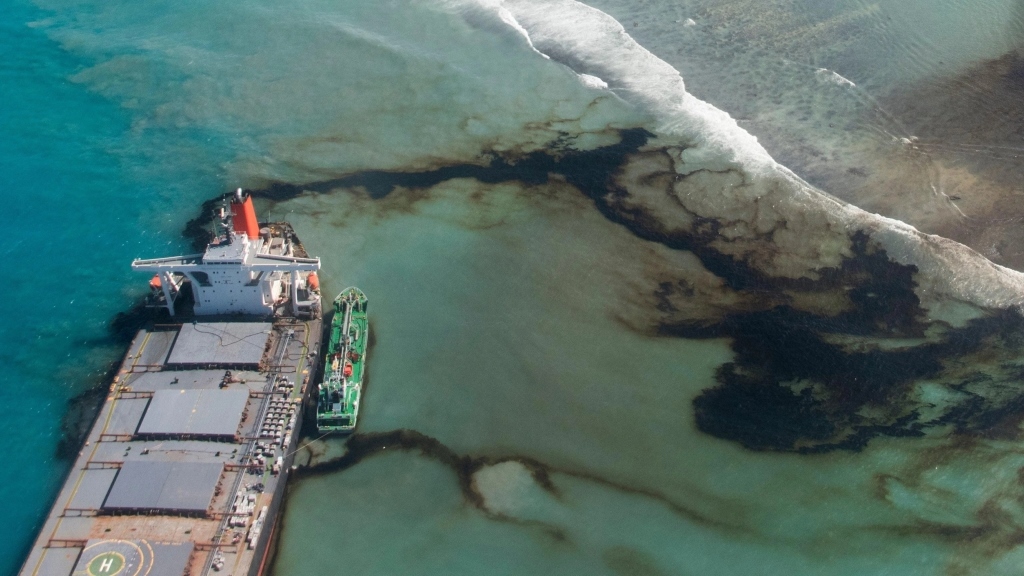 Oil leaks from the MV Wakashio, a bulk carrier ship that ran aground on a coral reef off the southeast coast of Mauritius, last August.Photo: Gwendoline Defente/EMAE (AP)

A study confirms that the crash of the MV Wakashio last summer spilled a new kind of shipping fuel into a sensitive marine environment.

A new analysis takes a look at what the authors say is the environmental impact of the first-ever spill of a new kind of marine fuel oil. The fuel was developed in response to regulations intended to lower sulfur emissions from the dirty shipping industry but is raising more environmental questions as it’s more widely adopted.

The study, published Tuesday in Marine Pollution Bulletin, looks into fuel spilled during the crash of the bulk carrier MV Wakashio, which ran aground on a coral reef off the Mauritian coast in July of 2020. About a month after the crash, the Wakashio began leaking oil from cracks in its hull. Satellite images showed dark plumes of fuel ballooning out into the crystal blue Mauritian coastline, which is home to a wide variety of marine life living on its coral reefs and in mangrove forests. Two weeks after the crash, the government declared a “state of environmental emergency.”

Since the crash, there has been heavy speculation that the Wakashio, which had 4,000 tons of fuel aboard, was carrying a new type of fuel that’s causing concern among the environmental community. The government of Mauritus’s murky response to the disaster included no analyses of the type of oil spilled, which fueled more speculation.

The new study confirms that a sample of residue from the coastline taken 5 miles (8 km) from the wrecked ship was fuel from the ship and that it was the new type of low-sulfur fuel. “Since the grounding of the Wakashio on a coral reef, there has been much speculation in the media about what oil was spilled, including headlines about so-called ‘Frankenstein fuels’, so we wanted to obtain a sample for research and analysis,” the study’s lead author, Alan Scarlett, a research associate at Curtin University’s School of Earth and Planetary Sciences, said in a news release.

While it may sound like a cinematic exaggeration, “Frankenstein fuels” are a growing concern among those keeping an eye on the shipping industry’s environmental impact. The phrase was coined as a derogatory term to refer to what’s known as Very Low Sulfur Fuel Oil, or VLSFOs, a relatively new type of fuel blend that’s gaining prominence in ships across the world.

In January of 2020, the International Maritime Organization (IMO) instituted new regulations that required shipping companies to substantially lower the amount of sulfur in their fuels, to try and cut shipping’s whopping contribution to air pollution around the world. The industry began to quickly favor VLSFOs, thanks in large part to their lower price point compared to other options. VLSFOs, as the name suggests, have far less sulfur than the fuel traditionally used in shipping, and thus it fits the IMO’s new guidelines.

But since they’re such a new form of fuel, VLSFOs have raised a whole host of other chemical questions—and may help the shipping industry cut down on sulfur emissions while upping other harmful side effects. The Clean Arctic Alliance, a coalition of nonprofits that includes Greenpeace, Friends of the Earth, and the World Wildlife Foundation, has sounded the alarm that heavy use of VLSFOs could make black carbon emissions from the shipping sector even more pronounced. (Black carbon, also known as plain old soot, is a greenhouse gas that experts say is incredibly damaging to sensitive environments—especially the Arctic—over the short term.)

The conversation around VLSFOs reached a head last August when the wreck of the Wakashio began leaking in Mauritius, and the new study provides some much-needed answers. First, some preliminary good news about this particular spill: in the sample of VLSFO collected from the ship’s wreck, researchers found lower levels of toxins dangerous to marine mammals than are usually present in traditional shipping fuels with higher concentrations of sulfur. Thus, “the impacts on marine organisms from exposure to toxic compounds in the oil may be less severe than with previous spills that involved older types of marine fuel oil,” Scarlett said.

But because VLSFOs are so new, Scarlett cautioned that this sample couldn’t paint a whole picture of the entire fuel class. “When we analysed several other Low Sulfur Fuel Oils, we found some contained higher concentrations of toxic components than the oil discharged in the Mauritius spill, so more research will be needed before we can conclude that all the oil types within this new class pose less of a threat to marine ecosystems than heavy fuel oils,” he said.

Ultimately, it’s crucial to research the impact of this fuel on marine environments as well as air pollution, as more and more ships use VLSFOs in accordance with the new standards.