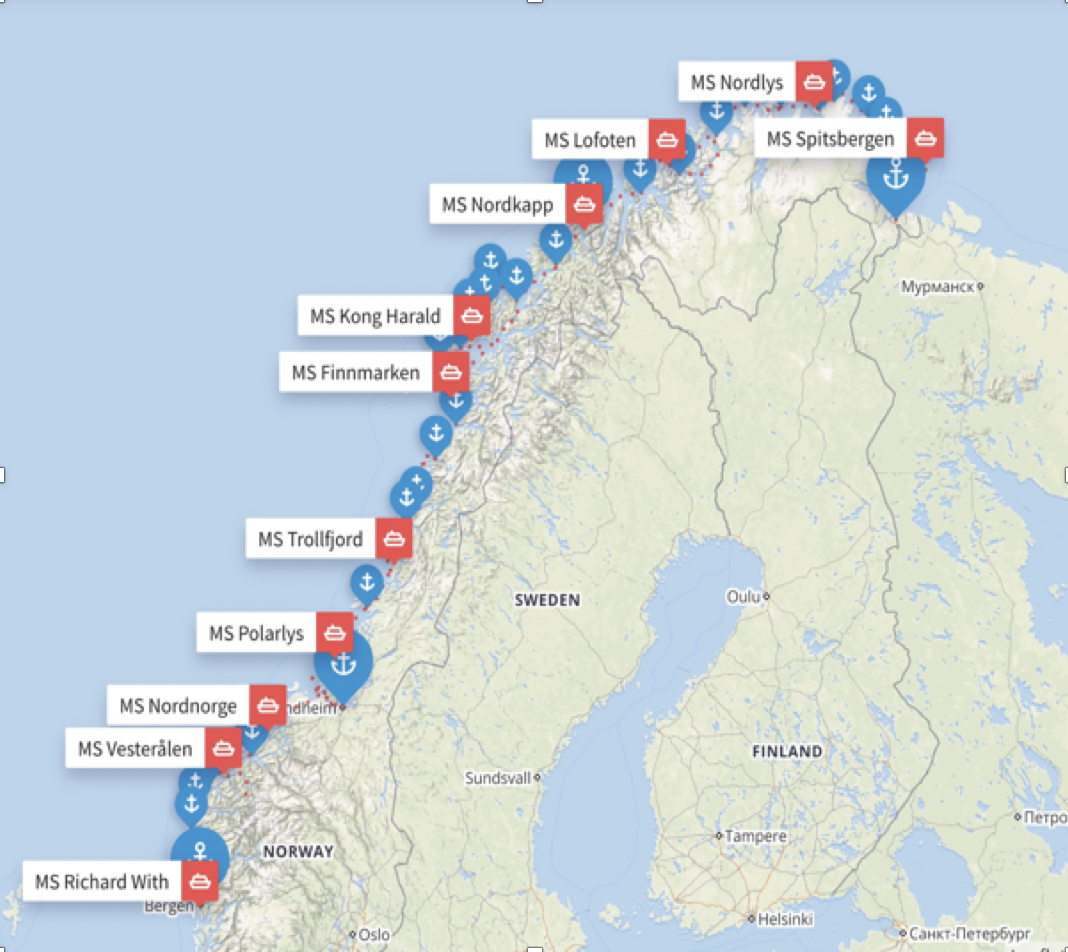 Hurtigruten is sometimes referred to as the Norwegian Coastal Express. The 11 coastal ships sail almost the entire length of the country, completing the round-trip journey from Bergen to Kirkenes and back again in 12 days, calling 34 ports. The trip along the Norwegian coast has been described as the "World's Most Beautiful Sea Voyage."

Ocean Visuals and Hurtigruten started collaborating just after the first SEA OWL™ prototype sensors were tested aboard oil combat vessels "OV Skomvær" and "OV Utvær" with the Norwegian Coastal Administration. The aim of our efforts were to perform long term testing of the sensors operational and technical capabilities. Mounted on "MS Midnatsol" and "MS Trollfjord", our sensors made a sample every 50 meter along the 2400 km route from Bergen to Kirkenes. We have now performed more than 10 million samplings from the Hurtigruten vessels, creating one of the most detailed databases of the status along the Norwegian coast line.

Our findings
Over the past years, Ocean Visuals has worked close with the captains, chiefs and electricians aboard the Hurtigruten vessels. The SEA OWL™ system has been tested in all sorts of weather, and we have gained important knowledge on service need (very low) and input for functional corrections along the way.

When we first started our sailing up and down the Norwegian coast, we started to see patterns. Oil readings would occur on the same spot every time we sailed by a certain area, but there was no evident reasons for the heightened readings. Eventually we learned of land based oil tanks from satellite photos and solved the puzzle.
When our SEA OWL™ detects oil in the water the crew aboard the vessel contacts the Norwegian Coastal Administration preparedness and response team. The system automatically informs of place and time, geographical placement in a map, the type of oil and the volume measured part-per-million (ppm).

We have made several severe measurements in major fishing ports along the coast line, the most serious in the winter time when it is dark and there is low visibility. The SEA OWL™ systems have also detected oil in the proximity of aquaculture sites. Ocean Visuals have called the owners of the salmon farming sites in order to warn them in advance.

In general, Norway has very clean waters, and our conclusion is that it is a healthy coast line. But there is a high risk that spills will not be observed in time or at all, especially during the winter months of the year. Darkness and harsh weather conditions prevent observations from being made by humans. That is why a network of ship-mounted sensors could create a wall of intelligence aboard the Hurtigruten vessels.